What better thing to do on a spring afternoon than to search for a proper cup of tea on Vienna’s Ring.  For our first test, we chose Palais Hansen Kempinski, one of a dozen or so 5 star establishments on the Ring.

Tea and drinks are served in the lobby lounge which is furnished comfortably. I arrived with MadFrenchLady and the young competent staff welcomed us and were attentive without being overbearing.  We decided to wait for CraftyLinguist before ordering our tea and we used the waiting time to take in the menu and the surroundings.

There is a reasonable selection of teas to choose from, but as this was my first visit I opted for a Darjeeling, and my friends were equally conservative in their choices.  The menu gives advice as to how long the leaves should stay in the tea.  Tea is served on a little tray with a small metal pot, which the waiter then fills with hot water at the table.  The tea leaves are in a conical metal strainer in the pot and a little dish is provided to put the strainer into when the “steeping time” is over.  I shall say more about “steeping” later. I am not convinced that this water is hot enough for a proper cup of tea, but at least it is not a glass of lukewarm liquid with some coloured dust in a bag on a string.  The cups are fine German porcelain and almost teacup shaped.  A small florentine biscuit was served with the tea.

MadFrenchLady had selected a cake from the display – called a Cremeschnitte, but reminiscent of the millefueilles of her home.  CraftyLinguist agreed to check out the Topfenstrudel with creme anglaise – she’s generous that way.  I am even fussier about cake than I am about tea, so I did not take any cake.  Both sweet selections passed the taste test and CraftyLinguist assured us that the strudel was freshly dusted because when she poured the creme anglaise over it, it rolled down without sticking to the top. 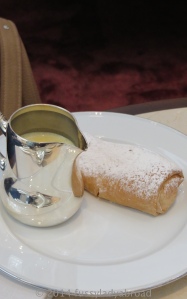 The staff were young and attentive.  A few of them were German.  That’s not such a surprise since it is a German chain and I had read a few days earlier that they are proud of their apprentice scheme which allows the young trainees to travel and work in other hotels in other cities.

It would not be Vienna without a chandelier or two.  As well as those in the entrance, Palais Hansen Kempinski has this tall and imposing chandelier style standard lamp in the middle of the lounge.  The furnishings were not 100% to my taste.  Some of the seating groups are satin covered, but I suppose that appeals to a certain part of their target market. 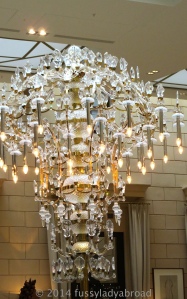 It was reasonably quiet  in the lobby lounge that day, just a few tourists, some elderly Viennese gentlemen and a small group of business travellers.

Being fussy, I like to inspect the facilities and my companions duly agreed to check my findings.  The room itself is very nicely furnished and it was clean.  We were all a bit surprised that we had to touch the beautiful taps to wash our hands.  CraftyLinguist prefers Dyson Blade hand drying.  However, I am fond of a pile of freshly laundered proper towels.  We were all ever so slightly upset by a lamp hanging squint.

We are all able to manage the menus in the German original, but at the suggestion of CraftyLinguist, we decided to check the translated menu.  A non-German speaker would certainly be able to get the gist of what was on offer since the menu was in two languages.  However, we feared that it may have been translated by a machine, or by a school child with a dictionary.  The first term to give us trouble was “steeping time” since all teas had a recommended number of minutes.  Where I come from we steep badly stained clothes before washing and tea is “infused” or “brewed”, however some research revealed that it may well be that “steep” is the term used in US English.  What we definitely do not have in US or UK English is “leach rolls”  It took us some time to work out what this could be since the German original indicated  “Jourgebäck” which is a dainty form of the usual range of bread rolls.  “Leach rolls” being, presumably, the type which is soaked in a lye to give a crust of the type you would find on a German Breze.  So, we would recommend a revision by a competent native speaker so that the standard of translation is consistent with the overall high standard of the hotel.

Watch out for the evaluation scheme in  future posts where I will try to assess the various aspects separately.  I did not note the prices, but our cup of tea was not prohibitively expensive.

For now, we can give Palais Hansen Kempinski 4 little teapots out of a possible 5.

Have a dose of what life is really like living here – from my single-handed destruction of the Turkish language, random arguments with random relatives about everything from apples to vaginas to learning the secrets to making the perfect içli köfte! Highs or lows this is my observations from the melting pot of crazy that is my life in Mersin.

Discovering Italy one trip at a time

A four-month cycling odyssey across the British isles

Well, That Was Different

A cottage in Orford
Thirdeyemom

Traveling the World and Doing Good

A Lady in London

nina on the go