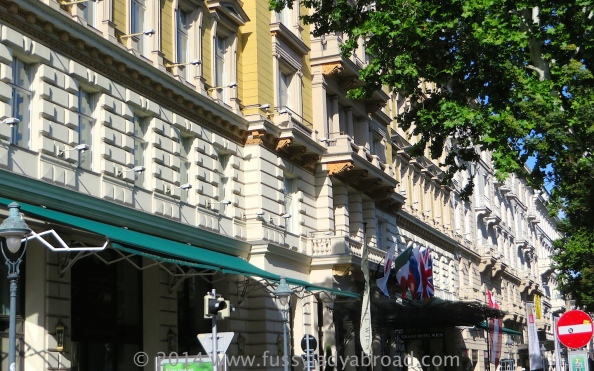 A sultry Tuesday afternoon in the office left us thirsty. So, AustrianGinAmatrice and FussyLady headed out to Vienna’s Ringstrasse for a proper cup of tea. If we are honest, we were probably more looking forward to the gin and tonic that would inevitably follow. We chose the Grand Hotel for our tea because it is the only hotel with its terrace on the sunny side of the Ring.

The first shock came when we read the menu: “Pot of tea €5.60”  Pot of tea?  Pot of tea?  Where’s the list?  Assam, Darjeeling, Earl Grey, surprise me with something I would not expect to find, to establish your 5 star credentials.  Pot of tea, indeed. Our friendly waiter re-assured us.  Of course they have tea, and in winter, the tea list is a book all of its own, but in Summer, on the terrace, there’s not much demand. He named a few tea varieties and we ordered Darjeeling and Earl Grey. Here’s what arrived 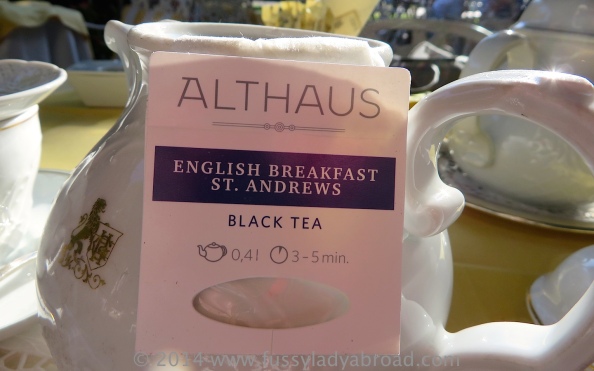 and as you can see, it is neither Darjeeling nor Earl Grey. The bag was served on the little dish, the water in the pot was not as hot as I would like.  You may know by now that I have opinions about tea: the water has to hit the tea leaves.  Dangling a piece of metal or a bag of leaves in lukewarm water is never going to result in a proper cup of tea.

The waiters were friendly enough and checked back with us if we needed anything else. It would take more than a smile to help us overcome the disappointment of not getting what we ordered. I am sure they would have changed the tea if we had asked, but the chances of this cup of tea ever becoming memorable in a positive sense had gone.

There is a grand piano in the lobby and the look is faded elegant, but the space is not really defined, so it is like sitting in a thoroughfare at the hotel reception. We chose to sit on the terrace outside. The terrace outside, being on the pavement, is like sitting on a thoroughfare. There is a further cafe upstairs on a mezzanine. It has a separate entrance from the Ringstrassengalerien shopping mall. 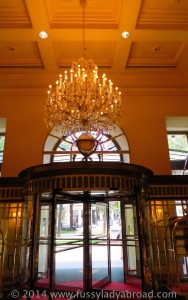 That day, in the Grand Hotel, there was the usual mix of tourists and local and international business men.

Well there had to be something Grand about this place, and this was it.  One floor down the beautiful staircase, the grand ladies room is as one would expect of the Grand Hotel Wien.  Traditional furnishings and a certain gleam.  The hand towels are the non woven fibre type.  Everything is clean. 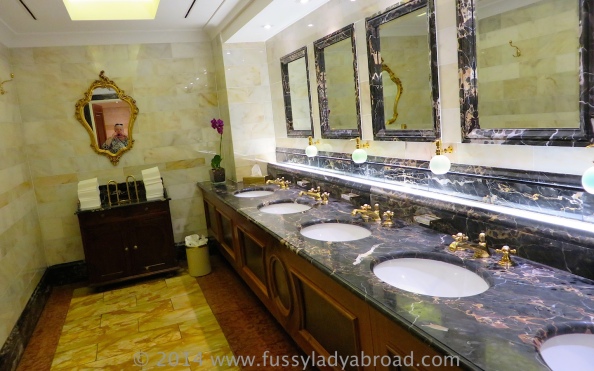 What my guest had to say

AustrianGinAmatrice was polite about the tea, but expressed her surprise that  standards could slip so far in a 5 star establishment.  She clearly wasn’t prepared to take the risk of further disappointment with her gin and tonic.  And so, we made our way to a newly opened restaurant on the Ring which is specialised in burgers, gin and cheesecake.  We were not disappointed. Said the Butcher to the Cow will have its own review later. 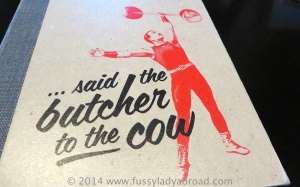 The Grand Hotel serves a full afternoon tea from October to April, so I shall return another time so see how it is.  For now, and for a proper cup of tea, Grand Hotel merits 1.5 little teapots out of a possible 5.  If, however, you want to freshen up somewhere grand, then the ladies’ room is worth a visit.

Have a dose of what life is really like living here – from my single-handed destruction of the Turkish language, random arguments with random relatives about everything from apples to vaginas to learning the secrets to making the perfect içli köfte! Highs or lows this is my observations from the melting pot of crazy that is my life in Mersin.

Discovering Italy one trip at a time

A four-month cycling odyssey across the British isles

Well, That Was Different

A cottage in Orford
Thirdeyemom

Traveling the World and Doing Good

A Lady in London

nina on the go